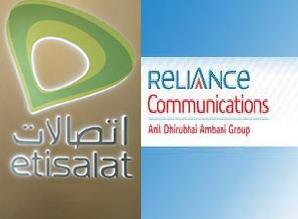 The UAE based Emirates Telecommunications better known as Etisalat, is in discussion with Reliance Communications (RCom) for a possible merger or acquisition. The Indian venture of the company is studying opportunities for M&A with RCom, Etisalat chairman, Mohammed Omran, told Bloomberg News. “In terms of customers, we are at a very initial stage in India and we are evaluating opportunities where we see value,” he said.

Already Etisalat  holds a licence in India from 2008 and is offering mobile services in 15 circles under joint venture Etisalat DB.The company has not yet had a commercial launch and they only had a ‘soft launch’ for not loosing the licence.The company has about 45 per cent stake in the Indian JV. As per  Indian rules, a telecom operator cannot hold more then 10 per cent in two telecom firms. So, Etisalat has to restructure its role in its Etisalat DB. Analysts say it could sell out after three years, which will happen in January next year.
Second, it could return the spectrum allotted by the Government, especially as the Department of Telecommunications (DoT) is considering a move which might include return of part of the Rs 1,651 crore an operator pays for a pan-India 2G licence. RCom board had, in June, given an approval for selling 26 per cent stake to a strategic or private equity investor.Yesterday, RCom Chairman Anil Ambani said the company would be debt-free in the next three years. “A combination of strategic and financial initiatives would result in a large cash infusion and significantly bring down debt levels in the next few quarters. Indeed, they could potentially make us debt-free in three years or so,” said Ambani.Etisalat is also looking for the possibility of merging with Idea Cellular or S tel.

This site uses Akismet to reduce spam. Learn how your comment data is processed.